1. A regularly recurring, complete series of movements or events.
2. A course of treatment consisting of several separate doses, as of chemotherapy.

A menstrual cycle in which ovulation is absent.

The period from the beginning of one heartbeat to the beginning of the succeeding beat, including systole and diastole. Normally, the atria contract immediately before the ventricles. The ordinary cycle lasts 0.8 sec with the heart beating approx. 60 to 85 times a minute in the adult at rest. Atrial systole lasts 0.1 sec, ventricular systole 0.3 sec, and diastole 0.4 sec. Although the heart seems to be working continuously, it actually rests for a good portion of each cardiac cycle. 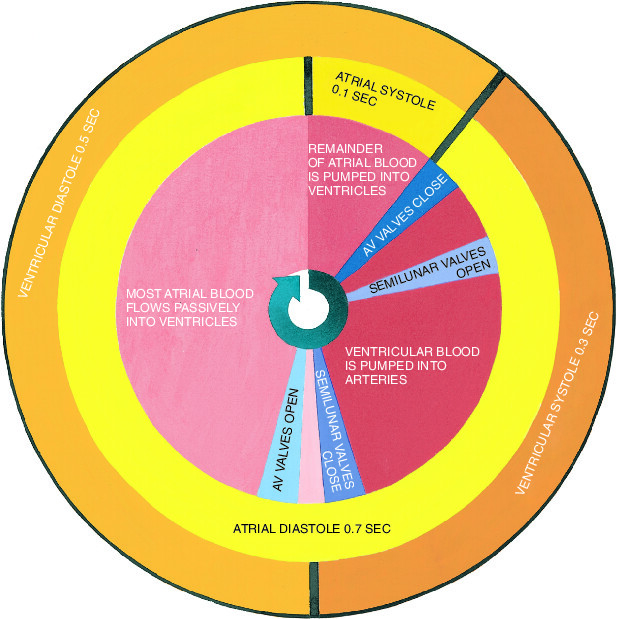 CARDIAC CYCLE (ONE HEARTBEAT, PULSE 75) The outer circle represents the ventricles, the middle circle the atria, and the inner circle the movement of blood and its effect on the heart valves.

The cycle of the growth and development of a cell. The cell cycle consists of mitosis, during which chromosomes actively divide to form two sister cells, and the interphase, during which the cell grows, begins to synthesize DNA, and prepares for chromosomal division. The interphase consists of several gap or G phases and the S (DNA synthesis) phase.
SEE: interphase; SEE: meiosis and SEE: mitosis for illus.

The order of physical and biochemical events that occur during the growth of cells. In tissue culture studies, the cyclic changes are divided into specific periods or phases: the DNA synthesis or S period, the G2 period or gap, the M or mitotic period, and the G1 period.

The progression of peristalsis through the stomach.

The cycle by which glucose is broken down in living tissue.

In assisted reproduction, any month when a woman is treated with drugs that stimulate the ovary to produce follicles.

All of the developmental history of an organism, whether in a free-living condition or in a host (as in a parasite that experiences part of its cycle inside another organism).

The periodically recurrent series of changes occurring in the uterus and associated sex organs (ovaries, cervix, and vagina) associated with menstruation and the intermenstrual period. The human cycle averages 28 days in length, measured from the beginning of menstruation. The menstrual cycle is, however, quite variable in length, even in the same person from month to month. Variations in the length of the cycle are due principally to variation in the length of the proliferative phase. 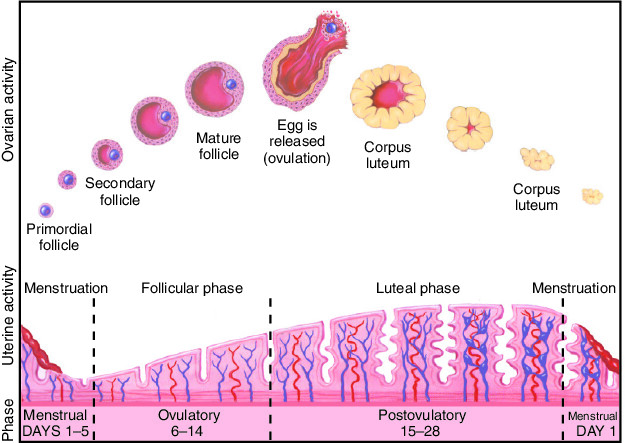 PHASES OF THE MENSTRUAL CYCLE
The menstrual cycle is divided into four phases characterized by histological changes that take place in the uterine endometrium. They are:

Proliferative Phase: Following blood loss from the endometrium, the uterine epithelium is restored to normal; the endometrium becomes thicker and more vascular; the glands elongate. During this period, the ovarian follicle is maturing and secreting estrogens; with the estrogen stimulation, the endometrium hypertrophies, thickening and becoming more vascular, and the glands elongate. The phase is terminated by the rupture of the follicle and the liberation of the ovum at about 14 days before the next menstrual period begins. Fertilization of the ovum is most likely to occur in the days immediately following ovulation.

Luteal or Secretory Phase: After releasing the ovum, the corpus luteum secretes progesterone. With the progesterone stimulation, the endometrium becomes even thicker; the glands become more tortuous and produce an abundant secretion containing glycogen. The coiled arteries make their appearance; the endometrium becomes edematous; the stroma becomes compact. During this period, the corpus luteum in an ovary is developing and secreting progesterone. This phase lasts 10 to 14 days.

Premenstrual or Ischemic Phase: If pregnancy has not occurred, the coiled arteries constrict and the endometrium becomes anemic and shrinks a day or two before menstruation. The corpus luteum of the ovary begins involution. This phase lasts about 2 days and is terminated by the opening up of constricted arteries, the breaking off of small patches of endometrium, and the beginning of menstruation with the flow of menstrual fluid.

Menstruation: The functional layer of the endometrium is shed.

The menstrual cycle is altered by pregnancy, the use of contraception, intercurrent illnesses, diet, and exercise.

The amount of time spent asleep and awake and the cycle of that schedule from day to day.

A cycle in assisted reproduction in which a woman receives drugs to stimulate her ovaries for production of additional follicles.
SEE: unstimulated cycle

An eccentric muscle contraction followed immediately by a concentric contraction of the same muscle group. The elastic potentiation that occurs during the eccentric phase increases the force of output of the concentric contraction. These exercises replicate functional movement patterns and are typically used in the advance phase of rehabilitation, particularly in sports rehab. Exercises incorporating this phenomenon are called plyometrics.
SEE: plyometrics

A cycle in assisted reproduction in which a woman does not receive drugs to stimulate her ovaries for production of additional follicles.
SEE: stimulated cycle

The complex cyclic chemical reactions in some (ureotelic) animals, including humans, that produce urea from the metabolism of nitrogen-containing foods. This cycle provides for the excretion of the nitrogen produced by the metabolism of amino acids as urea.

cycle is a sample topic from the Taber's Medical Dictionary.