[L. fluidus, flowing]
A nonsolid substance; a liquid or gas.

Fluid found in the fetal membrane that develops from the yolk sac.

A clear fluid that surrounds the fetus in the amniotic sac. Its primary functions are to suspend and protect the growing fetus, allow freedom of movement, maintain even constant temperature, and aid normal development of the fetal lungs. Volume increases from about 50 mL at 12 gestational weeks to around 800 mL at 38 weeks. The fluid is constantly being circulated by the fetus’s swallowing fluid, urinating, and inhaling/exhaling fluid during fetal respiration. Samples of amniotic fluid may be collected by amniocentesis to identify fetal chromosomal abnormalities, state of health, and maturity.
SYN: SEE: liquor amnii.
SEE: amniocentesis; SEE: oligohydramnios; SEE: polyhydramnios

Clear, pale, straw-colored fluid occurring in ascites. The fluid is normally sterile; its specific gravity is normally 1.005 to 1.015; the cellular content is less than 250 white blood cells per cubic millimeter, and its protein content is low. Cancer, heart failure, liver failure, peritonitis, and tuberculosis may alter the amount or character of ascites.

A fluid found in one of the fluid compartments of the body. The principal fluid compartments are intracellular and extracellular. A much smaller segment, the transcellular compartment, includes fluid in the tracheobronchial tree, the gastrointestinal tract, and the bladder; cerebrospinal fluid; and the aqueous humor of the eye. The chemical composition of fluids in the various compartments is carefully regulated. In a normal 154 lb (70 kg) man, 60% of total body weight, i.e., 42 L, is water; in a normal woman, 55% of total body weight, 39 L, is water.
SEE: acid-base balance; SEE: fluid replacement; SEE: fluid balance 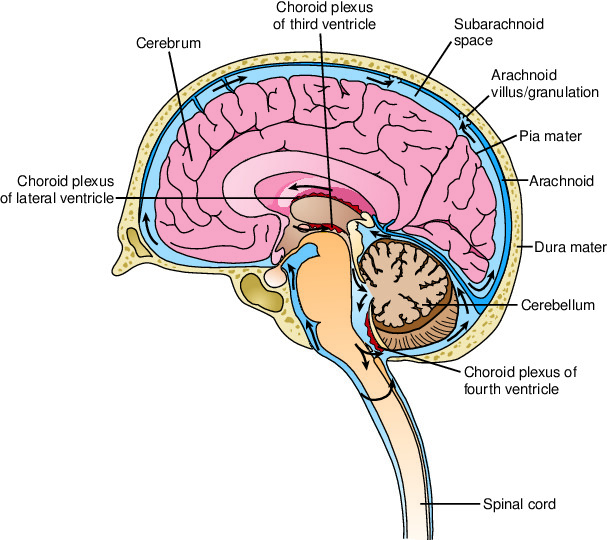 FLOW OF CEREBROSPINAL FLUID THROUGH THE BRAIN AND SPINAL COLUMN Formation, circulation, and reabsorption of CSF


CHARACTERISTICS
The fluid is normally watery, clear, colorless, and almost entirely free of cells. The initial pressure of spinal fluid in a side-lying adult is about 100 to 180 mm of water. On average, the total protein is about 15 to 50 mg/dL, and the concentration of glucose is about two thirds the concentration of glucose in the patient's serum. Its pH, which is rarely measured clinically, is slightly more acidic than the pH of blood. Its concentration and alkaline reserve are similar to those of blood. It does not clot on standing. Turbidity suggests an excessively high number of cells in the fluid, typically white blood cells in infections such as meningitis or red blood cells in intracerebral hemorrhage.

CSF may appear red following a recent subarachnoid hemorrhage or when the lumbar puncture that obtained the CSF caused traumatic injury to the dura that surround the fluid. Centrifugation of the fluid can distinguish between these two sources of blood in the spinal fluid: the supernatant is usually stained yellow (xanthochromic) only when there has been a recent subarachnoid hemorrhage.

Many conditions may cause increases in CSF total protein: infections, such as acute or chronic meningitis; multiple sclerosis (when oligoclonal protein bands are present); Guillain-Barré syndrome; and chronic medical conditions like cirrhosis and hypothyroidism (when diffuse hypergammaglobulinemia is present). The concentration of glucose in the CSF rises in uncontrolled diabetes mellitus and drops precipitously in meningitis, sarcoidosis, and some other illnesses. Malignant cells in the CSF, demonstrated after centrifugation or filtering, are hallmarks of carcinomatous meningitis.

MICROORGANISMS
The CSF is normally sterile. Meningococci, streptococci, Haemophilus influenzae, Listeria monocytogenes, and gram-negative bacilli are recovered from the CSF only in cases of meningitis. Syphilitic meningitis is usually diagnosed with serological tests for the disease, such as the venereal disease research laboratory (VDRL) test, the rapid plasma reagin (RPR) test, or the fluorescent treponemal antibody test. Cryptococcal infection of the CSF may be demonstrated by India ink preparations, or by latex agglutination tests. Tuberculous meningitis may sometimes be diagnosed with Ziehl-Neelsen stains, but more often this is done with cultures. Syphilis, cryptococcosis, and tuberculosis are much more common in patients who have AIDS than in the general population. 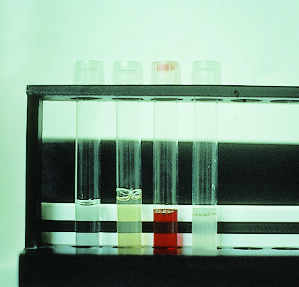 ABBR: ELF The subsurface interstitial fluid of the trachea, bronchi, and bronchioles.

The body fluid outside cells. It includes the interstitial, intravascular, and cerebrospinal fluids. Water is the common solvent of all these fluids. Approximately 36% of an adult's body fluids and 47% of an infant's body fluids are extracellular.

The liquid rich in heparin sulfate, hyaluronic acid, anti-müllerian hormone, defensins, and other chemicals that surrounds developing oocytes as they mature in the ovary.

In dentistry, the fluid that seeps through the gingival epithelium. It increases with gingival inflammation. Cellular elements within the gingival fluid include bacteria, desquamated epithelial cells, and leukocytes. Electrolytes and some organic compounds are also present.
SYN: SEE: crevicular fluid

Fluid within the anterior and posterior chambers of the eye.
SYN: SEE: aqueous humor

That portion of the total body fluid contained within blood and lymphatic vessels.

The clear straw-colored serous fluid secreted by the cells of the peritoneum. The few milliliters present in the peritoneal cavity moisten the surfaces of the two peritoneal layers and allow them to glide over each other as the intestinal tract changes shape during the process of digestion and absorption. In certain diseases (such as right-sided heart failure, cirrhosis, or ovarian malignancy) the amount of peritoneal fluid increases, and its appearance may become bloody or cloudy.
SEE: ascites

Fluid secreted by serous membranes in the pleurae that reduces friction during respiratory movements of the lungs. When excessive pleural fluid is secreted and not absorbed, a pleural effusion accumulates.

A crystalloid (such as normal saline or lactated Ringers solution) or a colloid (such as a solution of albumin) used to treat or prevent dehydration, hypotension, or hemorrhage.

Fluid secreted by serous membranes that reduces friction in the serous cavities (pleural, pericardial, and peritoneal).

The extracellular fluid that lubricates the potential spaces of the body, such as the pleura and pericardium.

fluid is a sample topic from the Taber's Medical Dictionary.