[O.Fr. espraindre, to wring]
Trauma to ligaments that causes pain and disability, depending on the degree of injury to the ligaments. In the most severe sprain, ligaments are completely torn. The ankle joint is the most often sprained. SEE TABLE: Grading System for Sprains; SEE: fracture; SEE: strain

SYMPTOMS
Pain may be accompanied by heat, discoloration, and localized swelling in the affected area. Moderate to severe sprains are marked by joint laxity, reduced range of motion, and limitation of function. When the sprained ligament is contiguous with the joint capsule, e.g., anterior talofibular ligament, medial collateral ligament, swelling occurs in the acute stage. When the sprain involves other intracapsular or extracapsular ligaments, e.g., calcaneofibular ligament, anterior cruciate ligament, swelling is slight or absent in the acute stage and progressively increases.

DIAGNOSIS
Diagnostic imaging of the joint is often indicated to rule out an avulsion fracture of the ligament's attachment, or other associated fracture

TREATMENT
The affected part should be treated initially with ice or other cooling agents to limit inflammation and hypoxic injury. Circumferential compression, in the form of an elastic wrap, should be applied to the joint and the limb elevated to reduce swelling. Joint range of motion should be restricted to patient tolerance through the use of immobilization devices, crutches, or both. Analgesics and nonsteroidal anti-inflammatory medications may be administered for pain and swelling. In the chronic stage of the injury, massage, intermittent compression, and muscle contractions can be used to reduce swelling. 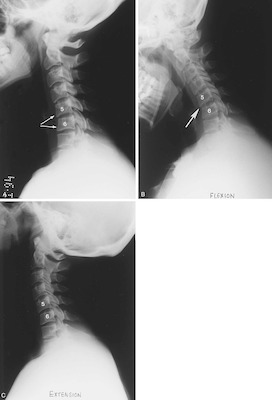 CERVICAL SPRAIN This 22-year-old female sustained a hyperflexion-hyperextension sprain to her cervical spine while driving in a demolition derby contest. (A) Plain film, lateral view shows a loss of cervical lordosis and hyperkyphotic angulation at C5-6 (5th and 6th cervical vertebrae).

Trauma to the ligaments of the ankle and foot, possibly involving tendon injury, but without an avulsion. Sprains of the lateral ligaments (most commonly the anterior talofibular ligament) account for approx. 90% of all ankle sprains.

Ice should not be applied directly to the foot and ankle in patients who are older or who have cold allergy or circulatory insufficiency.

Overstretching of the spinal ligaments, often involving the surrounding muscles and spinal structures. Small fractures of the vertebrae are often associated.

TREATMENT
Treatment includes superficial moist heat and rest. If muscle spasm is present, muscle relaxants, nonsteroidal anti-inflammatory drugs, or both, may be prescribed. After the acute symptoms have subsided, strengthening and flexibility programs are prescribed.

Trauma to the ligaments of the foot not involving the ankle.

ETIOLOGY
The rate of syndesmotic ankle sprains may be increased when athletes are participating on artificial surfaces, because of the increased friction between the shoe and playing surface.

SYMPTOMS
Patients may describe pain along the fibula, just superior to the lateral malleolus, that worsens during dorsiflexion or external rotation of the talus, or both.

sprain is a sample topic from the Taber's Medical Dictionary.